The Liberal Democrats, Plaid Cymru and the Greens have announced their ‘pro-remain pact’ (the ‘Unite to Remain’ group) in which each other’s candidates will step aside to allow one of the three parties to have a better chance of election in 60 nominated constituencies (49 in England and 11 in Wales).

The deal in Wales shows that far from representing a principled alliance of progressive parties (or even an attempt to maximise the chances of the election of pro-remain candidates as MPs), it is a pretty shabby deal largely aimed at shoring up support for the Lib Dems and Plaid in seats that they already hold but are concerned they may lose, and at damaging Labour’s chances of forming a government.

Under the deal, Plaid get the lion’s share with seven clear runs – in Arfon, Caerphilly, Carmarthen East & Dinefwr, Dwyfor Meirionydd, Llanelli, Pontypridd and Ynys Mon. The Lib Dems have been allocated three – Brecon & Radnorshire, Cardiff Central and Montgomeryshire. The Greens get just one – the Vale of Glamorgan.

Plaid has managed to persuade the other parties to stand aside in three of the four seats they are defending (Arfon, Carmarthen East & Dinefwr and Dwyfor Meirionydd). Given that the Lib Dems received 2.3% in Arfon, 2.2% in Carmarthen East & Dinefwr and 3.1% in Dwyfor Meirionydd this is not such an heroic act of sacrifice and principle as they make it sound. Significantly, the Lib Dems declined to stand aside in Plaid’s other seat (Ceredigion) where they were just 104 votes behind Plaid. Principled solidarity only goes so far obviously. However, in Arfon, Plaid will hope the endorsement of the Lib Dems and the Greens will boost their wafer thin majority of just 92 over Labour.

They have also been given a free run in Caerphilly, Llanelli, Pontypridd and Ynys Mon. All four are Labour seats and in the last Parliament were held by remain supporters. Some of Labour’s MPs have been staid, uninspiring figures unwilling or unable to support the degree of radical change needed in Wales – illustrated by the reluctance of many of them to get behind the policies adopted by the party in recent years and their unconcealed hostility to the leadership of Corbyn and McDonnell (despite the ‘Corbyn bounce’ that several benefited from in the last election). In addition, the Welsh government’s record – with some notable exceptions, such as on prescription charges – has been disappointing and marked by a poverty of ambition. So Plaid will wear its left face in some areas. But there is nothing radical about facilitating a Conservative government of free market zealots.

In the last election Plaid received just 14.4% of the vote against Labour’s 54.5% in Caerphilly; 18.2% compared with Labour’s 53.5% in Llanelli; and 10.3% in contrast with Labour’s 55.4% in Pontypridd. The Lib Dem and Green votes (where they stood) in these constituencies were derisory so, based on 2017, to believe that Plaid has a realistic chance of taking these seats from Labour requires rose tinted lenses of Hubble Space Telescope proportions. In all four seats allocated to Plaid by the alliance, the Conservatives came second so it’s possible that, while unable to take the seats themselves, the ‘Unite to Remain’ group make it easier for the Tories to oust Labour. This is particularly dangerous in Ynys Mon, where in 2017 the Tories were neck and neck with Plaid. If a remain alliance takes votes from Labour, there is a real threat that the Tories could come through the middle to take the seat.

Plaid and the Greens step aside for the Lib Dems in the only constituency they held in the last Parliament (Brecon & Radnorshire) which they won in a by election with a similar pact. They also get a free run in the seats of Cardiff Central and Montgomeryshire. The Lib Dems have previously held Cardiff Central and no doubt hope that the large student vote in the constituency will shift to them because of their remain stance. Unfortunately for them, the Labour candidate Jo Stevens, had a huge majority over the Lib Dems in the 2017 election (where they came third with a mere 5415 votes compared to Jo Stevens’ 25193) and she has a solid record of supporting and voting for remain. The other constituency lined up for the Lib Dems is Montgomeryshire where they came a long way behind the Tories – 8790 to 18075. The leave-supporting Tory, Glyn Davies, is not standing this time, having been replaced as Conservative candidate by the former Cardiff North MP, Craig Williams. He supported remain before the referendum but is a loyal leave foot soldier now.

Alliance seats where Plaid Cymru is the lead party 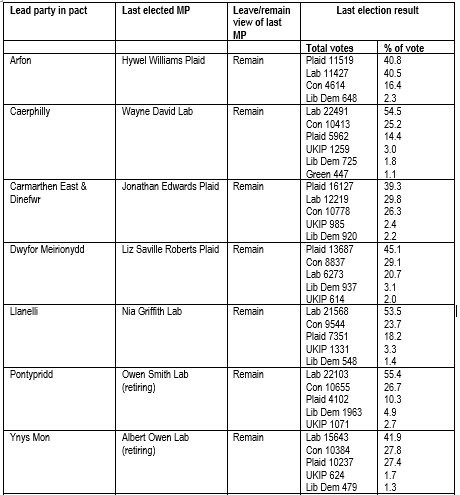 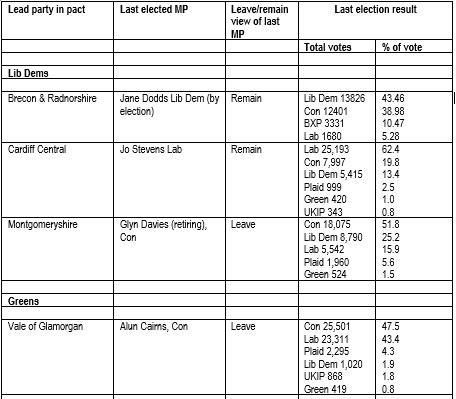 Finally, the Greens share of the pie is the Vale of Glamorgan constituency. In 2017, Labour lost to the Tories by just 2190 votes. Then the Tories were on 47.5% and Labour on 43.4. The Greens came sixth with 419 votes With impeccable timing, the deeply unpleasant Tory candidate, Alun Cairns, having denied any knowledge of the role of his former aide in deliberately wrecking a rape trial, has been outed as having received an email about this months ago. If Labour builds on its 2017 vote, this seat is winnable. No doubt Plaid (with their princely 4.3% of the vote) and the Lib Dems (with the even worse 1.9%) felt relaxed about standing aside for the Greens here. The Greens have no chance of winning this seat, but if they are able to gather in all the non-Labour pro-remain voters (and possibly even peel a few away from Labour), they will succeed in helping return the odious Tory Cairns to Parliament. They are sacrificing any radical credibility they have for the opportunity to lose badly but possibly prevent Labour from winning. Some deal.

Nobody is surprised that the combination of Orange Book austerity evangelists, ex-Blairite cheerleaders and former Tories that run the Liberal Democrats today would be happy to see Labour stopped from gaining a key target seat. This is entirely in line with Jo Swinson’s refusal to contemplate supporting a Corbyn government, and by default conceding a preference for a Brexit-supporting Tory government. The lies and misrepresentation of the Lib Dems’ dodgy bar charts gave us an early indication of the way their campaign was going to go and the pact fits the pattern.

The joker in the pack is the Brexit Party. It is impossible to know how their presence will affect the results – particularly in those areas that voted leave. They polled well in the European elections in Wales but they are an unknown quantity in a general election.

Jo Swinson’s fantasies aside, the only likely options after the election are some form of Tory or Labour-led government. For those who see Brexit as the over-riding issue of the election (from either a leave or remain perspective), anybody serious must know that there is no chance of remain without a Labour government and no chance of a soft Brexit either. Obviously, there are huge debates within that, but a prospective Labour government is pledged to negotiate a Brexit package that does not endanger workers’, environmental or consumer rights and then to allow the people to decide on this or remain.

Many members and supporters of Plaid and the Greens see their parties as being on the left. They will be astonished that in an election in which both Plaid and the Greens identify remain as the defining issue, they are prepared to take part in a pact which, if it works at all, will make it more likely that a hard-Brexit supporting Tory government takes office on 13 December.

The Greens, in particular, are likely to suffer serious damage for participating in a pact dominated by the pro-austerity Lib Dems and whose clear aim is to harm Labour’s chances of forming the next government. The sheer anti-Labour cynicism and opportunism of the remain pact is revealed in all its glory in the deal over the Vale of Glamorgan.

Hopefully the creators of this unprincipled piece of horse trading have underestimated two things: the intelligence of the electorate who will smell a rat when they see the implications of the pact for their constituency and the country at large; and the fact that only Labour has the potential to mobilise thousands of canvassers to counter the misrepresentations with a positive message of radical change.